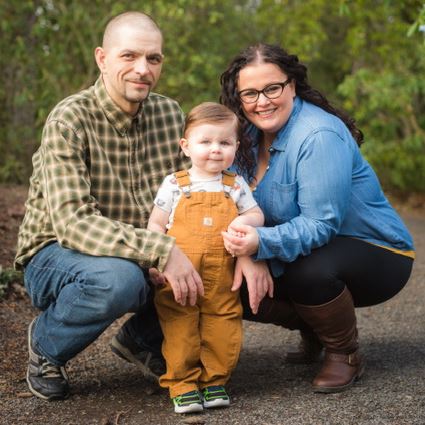 "My advice to any bride getting ready to shop for your wedding gown? Don’t miss out on a great opportunity because it is unknown or unfamiliar. I had little faith in the virtual experience, but it ended up being fun, unique, and totally memorable. I will literally never forget the process of shopping for, and ultimately finding, my wedding dress – everyone important to me was there, everything important to me was there, and all it took was some open mindedness and a bit of flexibility. Try it; you may be just as pleasantly surprised as I was."

I never know how to answer the question “how did you and Matt meet” because we met several times before we met-met. His sister-in-law was one of my coworkers/friends, and technically we first met when I stopped by her house for lunch. We met briefly again a year or so later, when I joined their family for Thanksgiving dinner. However, it wasn’t until a couple more years went by, when he had relocated from Bend and moved in with his brother, that we really met and became friendly. Being friends with his sister-in-law, I was at their house frequently, hanging out, joining family dinners, and sitting around their backyard.

In September 2017, his SIL and I were both bridesmaids in my best friend’s wedding. Since we had wedding party obligations throughout the day, and since I was single, I invited Matt to the wedding as my date. Our first official date was the rehearsal dinner, we had a great night out, and continued to celebrate with the group through the weekend.

Neither of us had intended this weekend-long date to result in a romance, but as he likes to tell people, I decided I liked him, and I decided he was going to like me. We spent hours chatting on Facebook messenger, and at some point I was headed to the coast for the weekend and finally made sure I had his number to text since my internet at the beach house was spotty (I do remember making a conscious choice to get his number at this point, because I didn’t want to go a weekend without chatting). Between September and November, we chatted non-stop, hung out frequently at their house & mine, and took a trip to the beach together. We spent Thanksgiving together, and then on Christmas, mere minutes before dinner was served, I took him upstairs away from the holiday festivities, to show him the positive pregnancy test I had just taken at their house.

Matt and I had both been told by different medical providers, at different times in our lives, that we wouldn’t be able to parent children; at least not biologically. And yet here we were, with a very bold line on a stick, telling us something quite different. We were thrilled, scared, surprised, and probably every other emotion two people can be when such a bomb drops, but from that moment forward, we’ve focused on loving, supporting, and encouraging each other, and on growing in our lives together.

Our son was born in June 2018 and was sitting under the Christmas tree, enjoying his first Christmas and first Christmas presents early in the morning, when Matt proposed. It was exactly the magical moment – full of joy and excitement – I’d have hoped for. 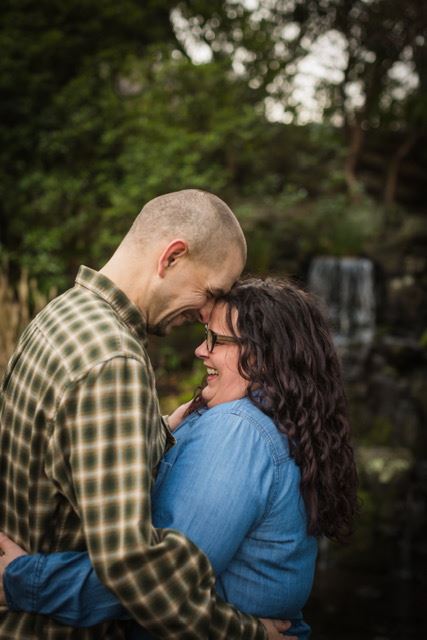 I was initially very hesitant about the virtual appointment process; I knew how I wanted my gown shopping experience to go, and virtual surely couldn’t be it! I knew who I wanted to be there – my mom, my maid of honor, my bridesmaids, and my cousin-turned-officiant – knew where I wanted to go afterwards for drinks and knew how amazing I wanted to feel while shopping for something so important. How could bringing dresses home to try on live up to my expectations of a day full of gowns, champagne, decadence? Ultimately, the fear of the unknown stepped in and forced my hand; I knew I had to have a wedding gown, and I knew that wedding gowns can take quite a few months to arrive, so although my wedding isn’t until November, I knew I couldn’t just wait it out forever.

Reluctantly, I gave in to the email received from Charlotte’s, offering a new and exciting virtual try-on experience. I figured, it would either be amazing, or it would be terrible, but there was really no way to know without going for it. I replied to the email that I was willing to give it a shot; little did I know then, I was absolutely still going to get my moment, my special experience, my audience, and ultimately my perfect say-yes moment.

From the moment I accepted the virtual appointment, it was over the top customer service from Holly and Stephanie. I received a lengthy questionnaire, asking what I like and dislike, allowing me to share links to my pinned dresses on my wedding board, asking for photos in gowns I’d already tried, and inquiring about me as a person, not just me as a bride. Already I felt that they were trying to get to know me and help lead me to my gown.

From there, I had two Zoom calls with Stephanie (and with Holly behind the camera). The end goal was to select up to five gowns for me to pick up and bring home to try on; ultimately the goal would be to fall in love with one of those five gowns, but if they weren’t The Dress, I could also bring them back and swap for five more, or I could just get the deposit refunded and hold my re-booked in person shopping appointment that I had on the calendar for June. 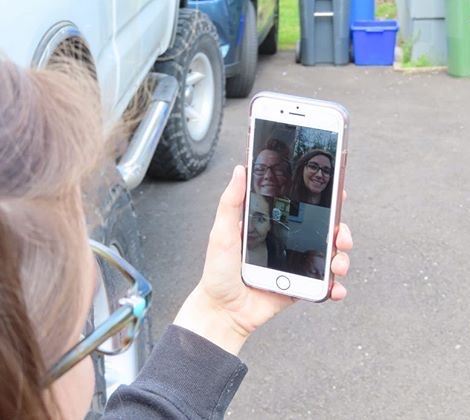 The first Zoom call took about 45 minutes; Stephanie reviewed my questionnaire, asked details about my wedding, asked about my fiancé, and reiterated how important it was to her that she was able to help me find my dream wedding gown. I was comfortable and at this point starting to feel a tad more excited – I wasn’t sure how trying on gowns at home could be as momentous as having my core group of women there with me, but I was still getting closer to my dress, and that was exciting. Stephanie explained that the next step would be for her to go through the salon and pull some dresses she thought might be good picks for me. She was going to pull them, get them onto mannequins, and get back on video with me to shop her selections. By this time, curiosity and Stephanie’s enthusiasm were getting the better of me; I booked the second Zoom call for a mere two hours later, and excitedly exchanged group texts with my maid of honor and bridesmaids, who were still trying to find ways to make this way of shopping for my dress, exciting and special.

The second Zoom call took about an hour or so, and when Stephanie logged in, there were five mannequins standing in a row behind her, each in a wedding gown that I absolutely would have pulled for myself – Stephanie was on her game! Starting with dress number one, Stephanie went through each gown; she showed me close ups of the details, talked about the designers, mentioned details I may not have noticed, and made sure I got a good look of the front, back, detail, and bustle on each gown. After an explanation of the gown and letting me get a good look, she asked “what is your first impression of this one?” I’d tell her, and then she’d tell me the reason she pulled the specific gown; some she pulled because I was pretty certain of what style I liked, and others because she had a good feeling. Over the hour call, she walked me through these five gowns, took my input on them, shared her thoughts on them, and then allowed me to knock one out of the running that I already knew wasn’t The One.

I now had four gowns to try on. I paid a deposit for those, as well as a selection of veils & hair pins, and my melancholy set back in a bit; I had to drive by myself to Charlotte’s the next morning, to pick up four wedding gowns to take home by myself and try on by myself, in my office, while my fiancé watched movies with our napping toddler down the hall. Ugh! This wasn’t the magic I wanted. But I also knew Stephanie had tried hard to WOW me, and I tried to keep myself positive.

The next morning, I drove across town to Charlotte’s, where I expected to see someone hanging garment bags on the front stoop for me to grab and go. Nope! Stephanie was at the door, huge beaming smile from behind the glass front doors. At their entrance were several garment bags, yes, but there was also a lovely gift box and a sign that read “pickup for bride to be, Veronica!” In the gift box were champagne & a wine glass, an “I said yes at Charlotte’s” sign, and a note on which gowns were included & the best way to get myself into each one. Because yes, I did now have to somehow wrangle myself into these things without any help. It was so special, and I found my excitement escalating quickly.

Now. How to make the trying on part feel special? It was a lofty goal in this time of Covid-19 and social distancing, and I live with my fiancé too, so how was I to make this happen??

The next afternoon (and let me tell you, having wedding gowns in your possession and not trying them on for 24 hours is a near impossible feat), I had opened a bottle of champagne and poured a glass for my mom, my maid of honor, my cousin, and set them on the porch; I poured another for myself of course. Each of them arrived with a lawn chair, a face mask, and a cell phone, and set themselves up across my yard & driveway, a safe six feet from each other. My maid of honor started a video chat with my two other bridesmaids, and from there – while my toddler slept, my fiancé watched movies, and my neighbors peeked through their blinds – I emerged from my house, into my driveway, in one, then two, then three different wedding gowns, greeted each time with cheers & clapping, and tons of laughing.

And then, I walked out the front door, down the steps, and across the driveway in dress number four. The Dress. I knew the moment I stepped into it, and they knew the moment I walked outside – this was IT! There were claps, toasts, photos, videos. There was laughing and excited silly dancing. There were all the women I wanted there, doing exactly what I had wanted (from a social distance): creating a magical moment with me as I said yes to my dress. 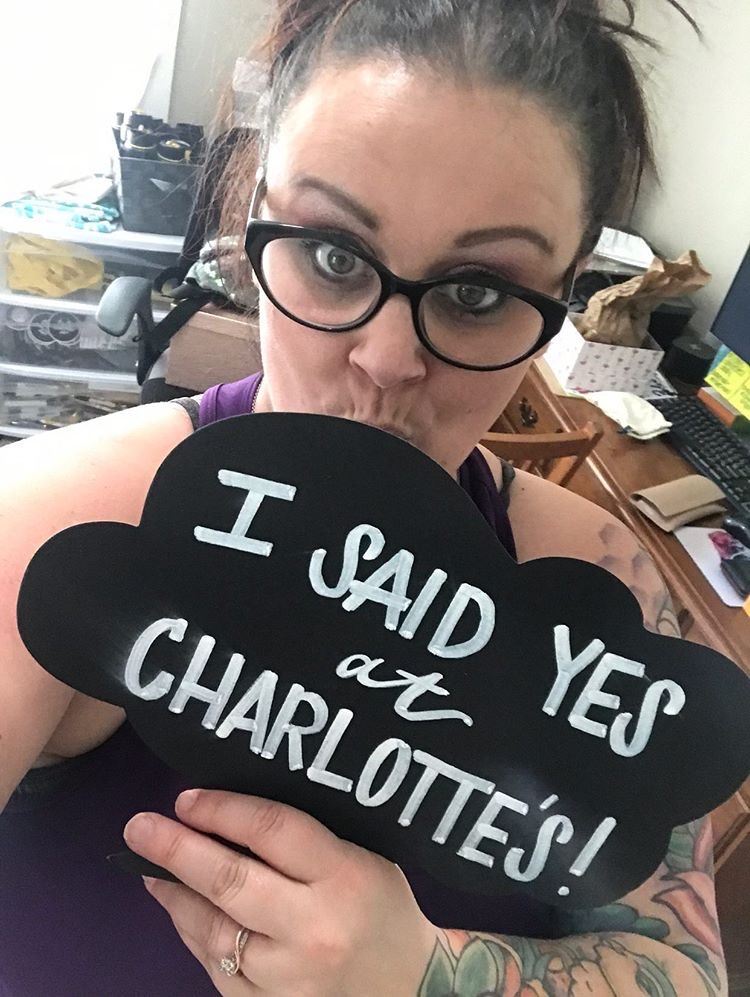 My advice to any bride getting ready to shop for your wedding gown? Don’t miss out on a great opportunity because it is unknown or unfamiliar. I had little faith in the virtual experience, but it ended up being fun, unique, and totally memorable. I will literally never forget the process of shopping for, and ultimately finding, my wedding dress – everyone important to me was there, everything important to me was there, and all it took was some open mindedness and a bit of flexibility. Try it; you may be just as pleasantly surprised as I was.